Kings Of Leon, The Hives and Animal Collective are the final day's highlights 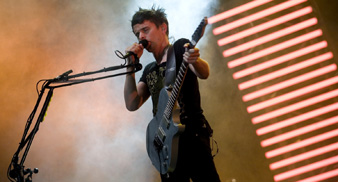 Headlining the closing night of the four day rock and dance festival, the Devonshire trio were spectacular, with the crowd whipped up into an even bigger frenzy than last night’s Arctic Monkeys show.

Flanked on both sides by massive screen projections – the live feed was mutilated with computer graphics that made the band look like they were melting back to the future.

Coming on to the soundtrack from ‘Close Encounters of the Third Kind’ – they kicked off with ‘Knights Of Cydonia’ then ploughed through their back catalogue with supreme skill.

‘Supermassive Black Hole’, and ‘Invincible’ were broken up with their electric piano version of the 60s classic ‘Feeling Good’ – with Matt Bellamy hammering away at his piano.

‘Starlight’, ‘Plug In Baby’ and ‘Time Is Running Out’ all sounded superb – it’s purely evident that Bellamy’s classical training combined with his love of prog creates an overwhelming sound.

Today at the festival also saw an incredible show from Animal Collective, who packed out the Fiberfib tent.

Also packing a punch were Kings Of Leon, Amy Winehouse, The Hives and Calexico – who’s amazing cover of Love’s ‘Alone Again Or’ had the thousands watching swooning to trumpet solo.

Benicassim’s party hasn’t ended just yet though, UNKLE and electro outfit Datarock are still to perform and there’s the end of festival beach party still to come.

Uncut has been at Benicassim all weekend – see our reports on the festival blogs here – pic blog still to come… www.uncut.co.uk/festivals