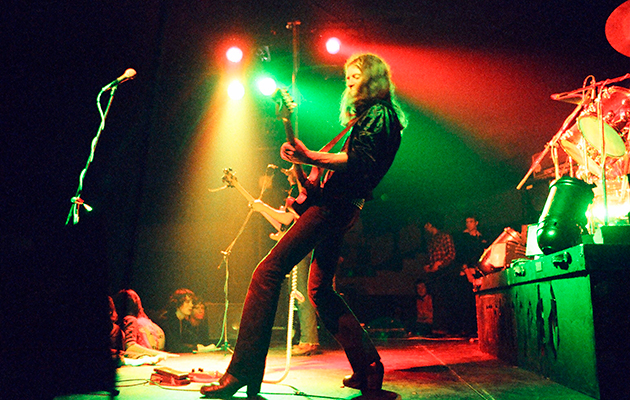 The guitarist was the last surviving member of Motörhead’s classic lineup.

He played on the band’s first six albums before going on to form Fastway. He later returned to make guest appearances on a number of subsequent Motörhead recordings.

This is how the news was reported on Motörhead’s Facebook page:

We are devastated to pass on the news we only just heard ourselves earlier tonight… Edward Allan Clarke – or as we all know and love him Fast Eddie Clarke – passed away peacefully yesterday. Ted Carroll (who formed Chiswick Records) made the sad announcement via his FB page, having heard from Doug Smith that Fast Eddie passed peacefully in hospital where he was being treated for pneumonia…

Phil Campbell said, “JUST HEARD THE SAD NEWS THAT FAST EDDIE CLARK HAS PASSED AWAY. SUCH A SHOCK, HE WILL BE REMEMBERED FOR HIS ICONIC RIFFS AND WAS A TRUE ROCK N ROLLER. RIP EDDIE”

Mikkey Dee said, “OH MY FUCKING GOD, THIS IS TERRIBLE NEWS, THE LAST OF THE THREE AMIGOS. I SAW EDDIE NOT TOO LONG AGO AND HE WAS IN GREAT SHAPE. SO THIS IS A COMPLETE SHOCK. ME AND EDDIE ALWAYS HIT IT OFF GREAT. I WAS LOOKING FORWARD TO SEEING HIM IN THE UK THIS SUMMER WHEN WE COME AROUND WITH THE SCORPS… NOW LEM AND PHILTHY CAN JAM WITH EDDIE AGAIN, AND IF YOU LISTEN CAREFULLY I’M SURE YOU’LL HEAR THEM, SO WATCH OUT!!! MY THOUGHTS GO OUT TO EDDIE’S FAMILY AND CLOSE ONES.”

Fast Eddie…keep roaring, rockin’ and rollin’ up there as goddamit man, your Motörfamily would expect nothing less!!!