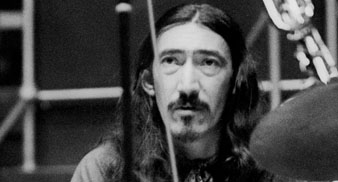 Jimmy Carl Black drummer for Frank Zappa and Captain Beefheart’s Magic Band amongst others, has died aged 70, after illness in Germany.

Black was drummer, vocalist, and sometime trumpet player for Zappa’s legendary band The Mothers Of Invention from 1964 to 1969.

Black also fronted his own band, Geronimo Black in the early 70s.

From 1990, Texan-born Black also played with The Muffin Men, a UK based tribute act to Zappa, featuring many other alumni from Frank’s original bands.

Black died from lung cancer which was only diagnosed in
August this year, in Siegsdorf, Germany on Saturday
(November 1), reports Associated Press.

A tribute concert is to be held in London on November 9. The
Muffin Men are amongst the acts who will play the charity show
at the Bridge House 2 venue in Canning Town.