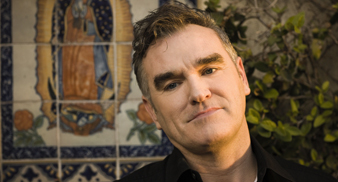 Morrissey was recently injured by a dog, it has emerged.

The former frontman of The Smiths suffered injures to his hand and arm after being attacked by the canine during his recent time in England, reports [url=http://true-to-you.net/morrissey_news_110711_01]True-To-You.net[/url].

The ‘Alsatian Cousin’ singer later went to hospital in Malmo, Sweden where X-rays revealed he had fractured the tip of his index finger.

According to the posting on the fansite, which Morrissey regularly uses as his official mouthpiece, the injury will not affect any gigs on his current European tour.

He is due to play in Copenhagen tonight (July 11), before moving on to dates in Sweden, Germany, Poland and Ireland before the end of the month.

The singer recently announced two London shows for next month at O2 Academy Brixton (August 7) and the Palladium (8) – according to True To You, he is “delighted” that tickets for the latter sold out within five minutes of going onsale.

The singer is still currently searching for a record label to release his new studio album. Despite the follow-up to 2009’s ‘Years Of Refusal’ being complete and ready to release, Morrissey has said he is struggling to find a label to put it out for him.

He has said he has no interest in self-releasing the album as his “talents do not lie in DIY”.