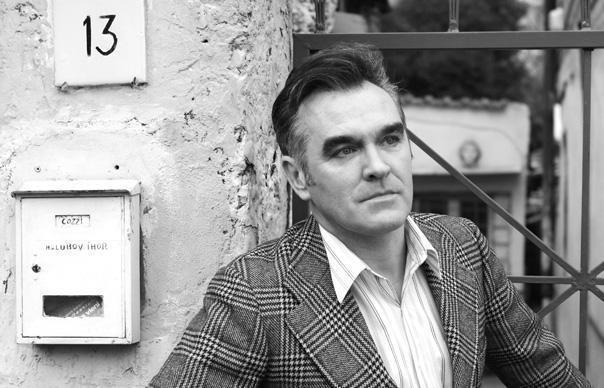 Morrissey slammed his latest record label, the royal family and carnivores during an emotional set at The O2 on Saturday night (November 29).

The singer’s band wore t-shirts reading “Fuck Harvest Records” as Morrissey made a speech about his new album World Peace Is None Of Your Business, “which was immediately deleted by a very clever record label”. When the crowd booed, he urged them to “let them know”.

Morrissey’s latest album, World Peace Is None Of Your Business, was released by Harvest in July. In the interim months an ongoing battle between the two parties has unfolded, with Morrissey insisting that he had been dropped and Harvest denying the claims.

The nineteen-song set also featured graphic scenes from slaughterhouses to accompany Meat Is Murder and mocked-up pictures of the Queen and Prince William and Kate Middleton captioned ‘United King-Dumb’.

The gig ended with fans speculating that he’d played his last show in London as he emerged for the encore of The Smiths‘ “Asleep” and said “remember my face, forget my fate” which, following a string of cut-short shows and health issues, some Tweeters took as an enigmatic farewell.

Though the show was skewed heavily towards material from World Peace Is None Of Your Business, Morrissey opened the show with an intense version of the title track from The Smiths’ The Queen Is Dead before launching into his first major solo hit “Suedehead”.

He then played all of the album bar ‘Mountjoy’ and ‘Oboe Concerto’ as roses were flung onstage, dropping in fan favourites “I’m Throwing My Arms Around Paris”, “Trouble Loves Me” from 1997’s “Maladjusted” and The Smiths’ “Meat Is Murder”. This was accompanied by shocking visuals of animals being killed and mistreated by slaughterhouse workers and introduced with a speech about the recent scandal around supermarket chickens infected with campylobacter. “I was interested to read in the last couple of days,” he said, “that 75 per cent of chickens sold in the UK are contaminated and poisonous. I thought to myself ‘ha-ha-ha-ha-ha’.”

The main set ended with a rapturously received “Speedway” from 1994’s Vauxhall & I before Morrissey returned for a passionate and moving encore of “Alseep” and a rousing “Everyday is Like Sunday”.