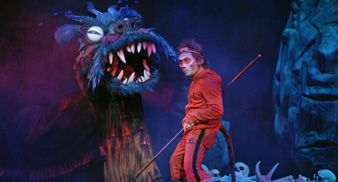 Monkey: Journey To The West is to start a second run in London this year, after a successful run at London’s Royal Opera House in July.

This time playing at a bespoke theatre in the Meridian Gardens, next to the O2 complex in North Greenwich, the purpose built space will be created by the Monkey team especially for the shows animation, effects and acrobatics.

Running from November 8 to December 5, the show’s run will include matinees with special family-priced tickets.

Monkey: Journey To The West is the creation of Chinese director Chen Shi-Zheng, designer Jamie Hewlett and musician Damon Albarn.

An album based on the show’s music recently became the first Mandarin recording to be a hit on the UK charts.

More information is available from www.monkeyjourneytothewest.com