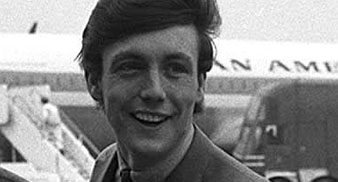 He had been hospitalised since September 2003, following a spinal cord injury that left him paralysed from the waist down.

Tragically, Smith had been preparing to travel to New York next week, where The Dave Clark Five are to be inducted into the Rock ‘n’ Roll Hall Of Fame. The first British group to provide a serious alternative to Merseybeat, their first big hit came in November 1963 when “Glad All Over”, written by Smith and Clark who co-wrote many of the group‘s biggest hits, eventually deposed the Beatles’ “I Wanna Hold Your Hand” from the top of the charts.

The group mixed old school sax and keyboard driven rock‘n’roll with a powerful production sound and a thumping beat that was, for a time, referred to as the “Tottenham Sound”, reflecting their beginnings in Tottenham’s South Grove Youth Club in 1962.

While Dave Clark gave his name to the group, it was Edmonton-born Smith’s throaty, Lennon-esque vocals that saw him as the de facto frontman.

The Dave Clark Five’s chart life in the UK actually extended through till the end of the decade, although they had peaked by the time the group’s John Boorman-directed film Catch Us If You Can was released in the summer of 1965. Re-titled Having A Wild Weekend in America, it was there that the group found far greater success, running a close second to the Beatles with 17 Billboard Top Forty hits and still holding the record for the most appearances on the Ed Sullivan Show.

They were pivotal to the English Invasion with hits like “Bits And Pieces”, “Because”, “Can’t You See That She’s Mine” and their sole American No. I “Over And Over” which only reached a lowly 45 in the UK.

After the group disbanded in 1970, Smith and Clark continued to work together until 1973, their medley “More Good Old Rock ‘N’ Roll”, the group’s final hit in 1970.

The Dave Clark Five were a seriously underrated band, except in America, where their uncomplicated rock and wholesome image saw them as more acceptable rivals to the Beatles than the unruly Rolling Stones. They somehow epitomised Englishness: Lillian Roxon once described Mike Smith as looking like “one of those very handsome, very snooty but very deferential salesmen at Harrods.”