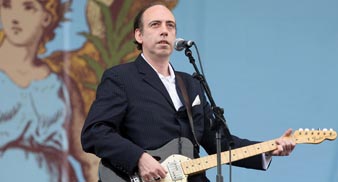 Mick Jones will tour with the explicit intention of playing songs by The Clash live for the first time in nearly 30 years as part of a run of shows for the Hillsborough Justice Campaign.

The Big Audio Dynamite man will play a series of live dates this December for the Justice Tonight tour, which aims to promote the campaign set up by the friends and family of the 96 people who lost their lives in the Hillsborough disaster in 1989.

Jones, who will performing songs by The Clash on tour for the first time since 1982, told NME he is “totally honoured” to be involved with the event.

He explained that he was encouraged to play the gigs after the success of a similar benefit gig in Liverpool earlier this year. Jones said: “It was just a fantastic, fantastic thing. I was very pleased to be asked and it went so well, so we thought we’d might try and do some more.”

He will also be joined by singer-songwriter Pete Wylie and Liverpool band The Farm for the six shows, which kick off at Cardiff‘s University Solus on December 1 and end on December 10 at Glasgow‘s O2 ABC. More special guests for the tour are set to be announced soon.

The full dates for the Hillsborough Justice Campaign tour are as follows:

Tickets are set to go on sale this Friday (November 11) at 9am (GMT). To check the availability of Justice Tonight In Aid Of The Hillsborough Justice Campaign tickets and get all the latest listings, go to [url=http://www.nme.com/tickets]NME.COM/TICKETS now[/url], or call 0871 230 1094.