Glastonbury boss to be honoured at the European Festival Awards 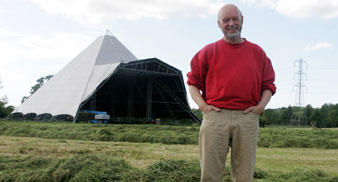 Glastonbury organiser Michael Eavis is to be given a Lifetime Achievement Award by the European Festival Awards at next year’s ceremony.

Eavis, who launched the first Glastonbury festival in 1970 after being inspired by the Isle Of Wight Festival, is being recognised for the success and influence of his Worthy Farm bash. He will be honoured with the award at the European Festival Awards ceremony in Groningen, Holland on January 11.

He said: “After 41 years, to win something of this magnitude is something to be incredibly proud of. To still be doing this after that amount of time is no mean feat.”

Meanwhile, managing director of the Festival Awards, James Drury, said: “Since founding one of the most famous and long-lasting festivals in the world, Michael has dedicated his life to Glastonbury and the millions of festival-goers which have attended the event over its 41-year history.”

“Glastonbury is the grandfather of the incredible festival market which Europe enjoys, and Michael is cited as an inspiration by almost every festival organiser I speak to across the world. This is why he is so deserving of this honour.”

[url=http://www.nme.com/news/various-artists/60426]Glastonbury also scooped the Best Major Festival gong[/url] at the UK Festival Awards in November, with other winners including Sonisphere and Bestival.

In July, Eavis admitted that [url=http://www.nme.com/news/glastonbury/57914]Glastonbury may only take place for another “three or four years”[/url] after claiming that festivals are “on the way out” as music fans are growing bored of going to them.

However, he seemingly remains committed to sprucing up Worthy Farm for festival-goers, after it was announced last month that [url=http://www.nme.com/news/glastonbury/60454]punters would be able to use washing machines on the site from 2013[/url].