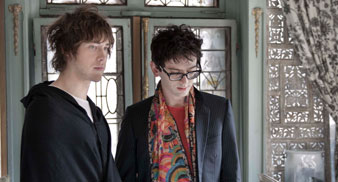 Midway through their set at the Heaven venue singer Andrew VanWyngarden paid tribute to the songwriter and frontman, who [url=https://www.uncut.co.uk/news/alex_chilton/news/14019]died of a suspected heart attack on Wednesday[/url].

“We’d like to dedicate this set to Alex Chilton,” he said before launching into new song ‘It’s Working’.

MGMT played a total of seven songs from new album ‘Congratulations’ during the gig, including the 12-minute long ‘Siberian Breaks’. VanWyngarden described the track as “an epic folk song”.

The group also performed ‘Congratulations’ track ‘Song For Dan Treacy’, despite the Television Personalities singer failing to appear when his band were due to open the gig earlier that night.

It was rumoured that Treacy, who was replaced by two other vocalists, was stuck in traffic, although no official explanation was given for his absence.