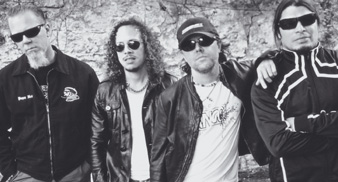 Veteran hard rockers Metallica have today confirmed rumours that they will play a headlining gig at the newly built Wembley Stadium in the Summer.

A one-off date at the venue on Sunday July 8th will see Lars Ulrich, James Hetfield et al play there for the first time since participating in the Freddie Mercury tribut show in Spring 1992.

The “Sick of the Studio 07” tour has seen nine other headlining shows announced, taking place across Europe. The band are seeking a brief hiatus from the pressures of recording their ninth studio album, which is due for completion early next year.

Front man Ulrich explains: “Sometimes we get a little tired of staring at the same four walls of the recording studio, as well as the same faces that inhabit the studio day in and day out, and we need to get out and just PLAY! This tour gives us a chance to stretch out a bit and jam in front of real fans.”

James Hetfield adds “Metallica have a history of needing to escape from the studio during the long recording process, and it’s always worked out well for us. Getting out on the road for a few weeks lets us feed off of the energy from the live crowds and take it back into the studio with us.”

On playing the shiny new Wembley venue, Lars Ulrich also says “Like just about any aspiring rock musician, we always dreamed of someday headlining the marquee venues around the world, such as Madison Square Garden, Candlestick Park (in our hometown of SF) Budokan, the LA Coliseum…and of course, Wembley Stadium. Any band who denies wanting to be up on that stage in front of that many fans is just bulls*%#*ing you.”

Tickets for the London date, priced £40 go on sale this Wednesday (March 21) at 9am.

The ten “Sick of the Studio” shows so far confirmed are as follows: