Metallica To Return To UK For More Live Shows 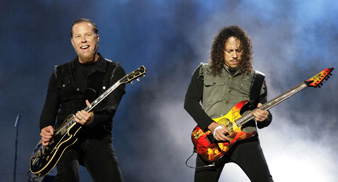 Metallica have announced their first full UK tour in twelve years, set to take place from February 25 next year.

The heavy metal titans who recently charted at number one in the album charts with their 12th LP ‘Death Magnetic’ will play six arena dates, all in the round, including a return to London’s 02 Arena, where the band played a fan club only show in September.

The band commeneted then that they “can’t wait to visit the UK again, so strap in, hang on, and get ready for the nuttiness to begin”.

Support on all dates will come from Machine Head and The Sword.