Mael brothers will sign their 21st LP during Islington residency 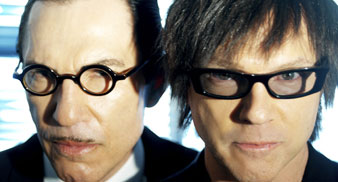 Sparks have announced that they are to appear instore at Islington Borders to meet fans and sign copies of their forthcoming new studio album Exotic Creatures Of The Deep.

The pioneering duo, as previously reported, are to play their entire catalogue of 20 albums across 20 nights at London’s Islington Academy from May 16 to June 11. With a live premiere of their brand new album taking place at Shepherd’s Bush Empire June 13.

Exotic Creatures Of The Deep is set for release on May 19 and the Sparks duo will meet and greet fans on May 20 from 5pm at Borders, prior to their Propaganda show that night.

The band are set to play an album a night on the following dates:

More details about the album and the shows are available from the official Sparks website here: Allsparks.com