The band follow up Mercury Prize shortlisted "A Certain Trigger" 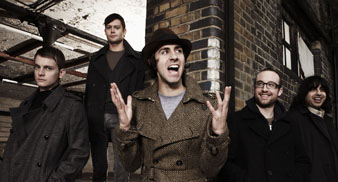 Newcastle post-punk revivalists Maximo Park have announced that their second album ‘Our Earthly Pleasures’ will be released on April 2.

A single “Our Velocity” will precede the new album on March 19.

“Our Earthly Pleasures” is the anticipated follow-up to 2005’s Mercury Prize nominated “A Certain Trigger” which featured four Top 20 singles.

The new 12-track studio album was produced by Gil Norton, whose previous credits include the Pixies and Foo Fighters.

Paul Smith, the band’s singer, says that the new album is more rock, but without cliché. “Thanks to two years of touring the world and with the contribution of Gil Norton, Our Earthly Pleasures is a heavy, eye-opening record. It’s rock music without the clichés, dealing with the world on an emotional level. Ultimately we want to reach as many people as possible because we feel this record has the ability to inspire and affect people,” says Smith.

The full tracklisting for the album is:


Maximo Park are currently on a European Tour and are due to play Moscow this Thursday (January 25) and Istanbul on Saturday (January 27).

More UK dates are expected to be announced soon.