Mark Ronson To Tour In February

The NY-based DJ follows on from Electric Proms success 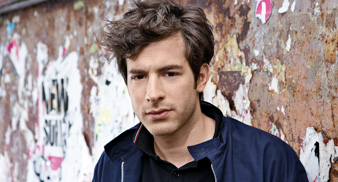 Mark Ronson has announced his first live dates of 2008, with a short UK tour taking place in February.

Following the success of his ‘Version’ album, featuring collaborations with Daniel Merriweather, Amy Winehouse and Lily Allen, the DJ/producer’s shows are eclectic.

Recently Ronson was the first producer allowed to remix a Bob Dylan track. He re-worked ‘Most Likely You Go Your Way (And I’ll Go Mine)’ which appears on Dylan’s best of compilation ‘Dylan’.

The newly announced shows will see Ronson collaborate with album vocalists Merriweather and Alex Greenwald, whilst being backed by a ten-piece band.

Tickets go on sale this Friday, November 16 at 9am, pre-sale tickets are available from Mark’s website www.markronson.co.uk a day earlier, on November 15 at 9am.

Venues/dates are as follows: