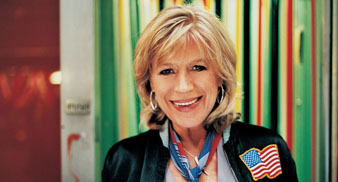 Singer Marianne Faithfull has added a further UK date to her current Songs of Innocence and Experience European tour.

Faithfull says on her website that she intends to play a more acoustic show: “It’s more chamber music because I wanted to use my voice more, and I don’t want to have to shout because that’s not good for me. It’s very emotional, but that’s ok too.”

Following on from a show at London’s intimate Pigalle club last month, she will now play at the Royal Liverpool Philharmonic Hall on Friday May 11.

Faithfull also plays a headline show on the opening night of the Women’s Arts International Festival in Kendal on May 4 – other artists that will appear at the three-week event include Patti Smith, Battye LaVette, Sandie Shaw and Joan As Policewoman.

The London show last month was Faithfull’s first first UK appearances since recovering from breast cancer at the end of last year.

Marianne was originally due to have embarked on a three month tour of Europe and North America at the start of October 2006. These concerts have now been re-scheduled with the announcement of the European schedule.