Our favourite new festival opens with some familiar faces 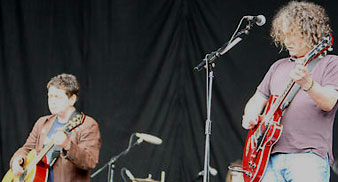 Some of Liverpool’s finest bands have played today at the Knowlsey Hall festival.

Wah! were followed on stage by Shack, featuring Mick and John Head, whose set included a fiery version of Arthur Lee’s “House Is Not A Motel”.

The Thrills, from across the water in Ireland, played crowd favourites “Santa Cruz” and “One Horse Town”.

Headliners The Who are scheduled to take the stage at 9.

Weather and toilet conditions have, thankfully, held up so far.

Check out our new Uncut Festivals Blog here- we’re at Glastonbury and Knowsley Hall this weekendwww.uncut.co.uk/blog/index.php?blog=10&title=