Pete Doherty and Carl Barat together at Hackney show 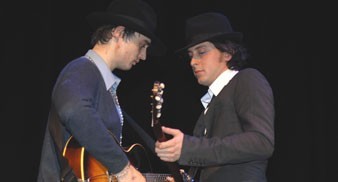 In what one startled fan described as the “biggest reunion of the last 20 years”, former Libertine bandmates Pete Doherty and Carl Barat played 13 Libs’ classics at the second of Doherty’s An Evening With Pete Doherty shows at London’s Hackney Empire on Thursday night.

Just over an hour into the show, Doherty announced: “You’ve been waiting for this moment. . .Ladies and gentlemen, Mr Carlos Barat.” Cue absolute hysteria, and Pete adding: “Only joking! What do you expect for 25 quid.”

And with that, there was Barat, dapperly turned out in trilby and black suit, the duo going on to play 13 songs together, amid much hugging and fraternal clinches and an ecstatic audience response.

After a brief encore, the pair made a swift exit, before subsequently being persuaded by fans outside the back of the venue to play an impromptu version of The Libertines’ “Can’t Stand Me Now” from the windows of one of the backstage dressing rooms, with Kate Moss looking on.

For more on An Evening With Pete Doherty and the Libertines ‘reunion’, see Allan Jones’ Editor’s Diary.

Full Pete and Carl set list:
What A Waster
Death On the Stairs
The Good Old days
What Katie Did
Dilly Boys
Seven Deadly Sins
France
Tell the King
Don’t Look back Into The Sun
Dream A Little Dream Of Me
Time For Heroes
Albion
The Delaney