Leonard Cohen working on new album with his son 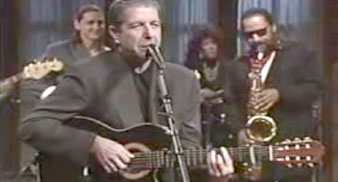 Leonard Cohen is currently working on his first studio album in seven years, his son Adam Cohen has revealed.

Adam, who released his own LP ‘Like A Man’ earlier this year, confirmed that he had been working with his father in a “consultant capacity” and that the Canadian singer-songwriter could release his first record since 2004’s ‘Dear Heather’ later this year.

Although Cohen‘s label Sony have claimed that they have no details regarding a forthcoming album, Adam told BBC News that he had been joining his father in the studio. He said: “I was asked in some consultant capacity on a few occasions and I’m very happy to listen to what’s being created and be asked for my opinions.”

He dismissed the idea of a collaboration between him and the ‘Hallelujah’ legend, however, adding: “I would love to make music with my father and I have in a private way, but as for a public way he really doesn’t need my help or contribution. There’s something beautiful about not doing it just gratuitously.”

Earlier this year, Leonard Cohen was awarded Spain’s esteemed Prince Of Asturias Award for literature, joining previous winners of the prestigious prize such as the playwright Arthur Miller and naturalist Sir David Attenborough.