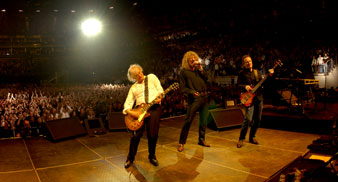 The legendary guitarist and bassist led David Grohl on drums through the Zeppelin classics Rock and Roll and Ramble On, the BBC reported.

The collaboration was Zeppelin’s first appearance since the band played a one-off gig in December 2007.

Grohl told the crowd: “We are going to do something special tonight that we have never done before. Tonight will be the show we are talking about for the next 20 years.”

He went on: “We knew from the beginning this wasn’t going to be another outdoor show, we have been planning this for six months so we would like to welcome Jimmy Page and John Paul Jones onstage.”

As the show closed Grohl was visibly overcome with emotion as he told the crowd: “Welcome to the greatest day of my whole entire life.”