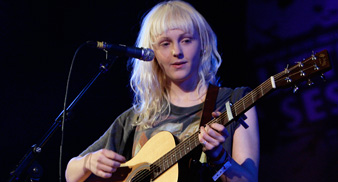 Laura Marling is set to release her third album ‘A Creature I Don’t Know’ on September 12.

The album, which is the follow-up to her 2010 album ‘I Speak Because I Can’, has been produced by Kings Of Leon and Ryan Adams man Ethan Johns.

The singer has posted a video preview of her new album, which you can view by scrolling down to the bottom of the page and clicking.

Laura Marling is set to debut a series of new songs from ‘A Creature I Don’t Know’ during her set at this weekend’s Glastonbury. She plays on the Pyramid Stage on Sunday (June 26) at 3pm (BST).

She is also booked to play sets at End Of The Road Festival, Bestival and Green Man festival during the summer.