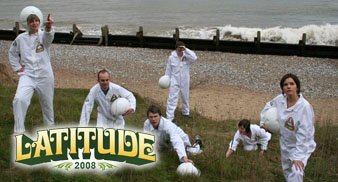 Bearsuit, Truckers of Husk and The Beep Seals have been added to the line-up for the Lake stage at this year’s Latitude festival, which will be curated by Radio 1 DJ Huw Stephens.

They join the Lake Stage headliners, The Wave Pictures, Errors and Cheeky Cheeky and the Nosebleeds. Also appearing over the weekend will be Johnny Foreigner, Sky Larkin, The CocknBull Kid, Gideon Conn and Lovvers.

The Lake Stage Presents BBC Introducing… will host three days of brand spanking new acts who are tipped for great things. Last year’s line-up included Dan Le Sac and Scroobius Pip, Joe Lean and the Jing, Jang, Jong and Scouting for Girls, who went to number one with their debut album.

“Latitude, as well as being in an idyllic location with so many different things going on, has a huge emphasis on quality new music,” said Stephens. “The bands on the Lake Stage are like the first crop of new music, freshly squeezed playing a festival for the first time.”

Headlining this year’s event in the Obelisk Arena, Franz Ferdinand make their only English festival show, the Icelandic post-rock outfit Sigur Rós and New York titans, Interpol close the arena on the Sunday.

For all the up-to-date information see our Latitude blog.