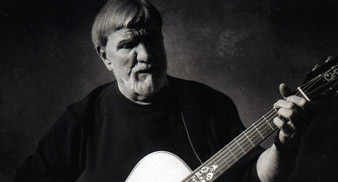 Larry Jon Wilson, the country singer who played with Kris Kristofferson and Townes Van Zandt, has released his first album for 28 years.

The reclusive singer, who has only made five records in a career spanning over 40 years, was initially reluctant to record an album. He was finally persuaded on the proviso that he could he could record stripped down versions of the songs.

“I’ll do it, but I got to do it with no sticks and no plugs,” said Wilson.

Each track on his self titled acoustic album, which was released this summer on 1965 Records, was captured in one take during five days on the Florida coast.

Wilson was one of the key players in the 1970s country music “Outlaw” movement alongside Waylon Jennings, Willie Nelson and David Allan Coe and was featured in the 1975 documentary “Heartworn Highways”.

He will play four intimate live dates this month including Lounge On The Farm Festival and a one-off performance for Health & Happiness at The Gladstone in London on July 14.