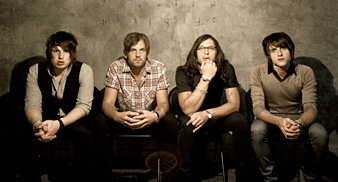 Kings of Leon have revealed the full album tracklisting for their forthcoming album ‘Only By The Night.’

Containing eleven tracks, Kol’s fourth studio album is due for release on September 22.

The first track from the new material “Crawl” was previewed as a free download for 7 days last week, and the first single to be released from the album will be ‘Sex On Fire’ on September 15.

The new Kings of Leon album tracklisting is:

Kings of Leon are due to headline this year’s V Festival in Chelmsford and Stafford and will play a one-off warm up show at London’s Brixton Academy on August 14.

The band are also set to play a full UK Arena tour at the end of the year, calling at: