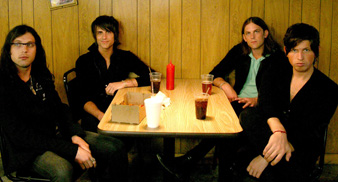 Kings Of Leon‘s show at London‘s O2 Arena tonight (February 21) has been postponed because of a tourbus fire at the venue.

Around 60 firefighters fought to control the blaze. A spokesperson for the London Fire Brigade told Uncut‘s sister-title [url=http://www.nme.com/news/kings-of-leon/54342 ]NME[/url] that the firefighters were called to the scene at 8:18am (GMT) this morning and that the fire was out by 11:33am. No injuries were reported.

The band are planning to reschedule the gig for early 2011.

Their spokesperson said: “The complications and disruption caused by this morning’s fire have meant there is now insufficient time to rig the arena for tonight’s performance.”

They added: “Every opportunity has been made to allow the concert to go ahead as planned and it is a great disappointment to have to postpone the event. We are thankful to report that all crew are safe and no one was seriously injured. Kings Of Leon send their sincerest apologies to all the fans who were planning and travelling to attend what was due to be a triumphant finale to their European tour tonight. The date will be rescheduled in 2011 at the first available opportunity.”

The fire took place in a loading bay at the arena and did not affect the seating or viewing area.

Station Manager Sally Cartwright, who was at the scene, said: “One double decker tour bus within a loading bay was badly damaged by the fire. It was quite a large incident and we had around 60 firefighters there at the height of the blaze.

She added: “Firefighters arrived on the scene quickly and were met by extremely hot and smoky conditions. Our crews should be extremely proud of themselves – they did a fantastic job today and managed to prevent the fire from spreading. We are now working closely with staff from the O2 to ensure that a normal service is restored as quickly as possible.”

Following the announcement bassist Jared Followill posted a message on his Twitter page, Twitter.com/youngfollowill, writing: “Thank God all the crew are safe. Gutted”