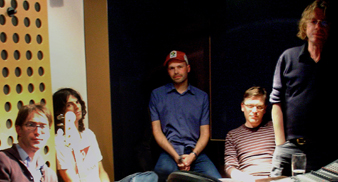 Kevin Ayers is back from the wilderness after fifteen years with a brand new album. The genius songwriter/guitarist has teamed up with many of the musicians he has inspired over the years to make ‘The Unfairground’.

Ayers co-founded Soft Machine with Robert Wyatt, David Allen and Mike Rattlegate in 1966 and later flourished in his solo career working with the likes of Syd Barrett, Mike Oldfield and John Cale.

‘The Unfairground’ was recorded with the help of several artists, including Teenage Fanclub, Euros Child, Neutral Milk Hotel, Candie Payne and Architecture in Helsinki.

Kevin Ayers has been all around the globe, recording the album between 2006 and 2007. The bands have recorded in Arizona, Brooklyn, New York, London and Glasgow and will be ready to release the album by September 3 through Lomax Recordings.

The track listing for the album is: