Keith Richards Reveals All About Relationship With Johnny Depp

They chat in the new all-singing Uncut tenth birthday issue 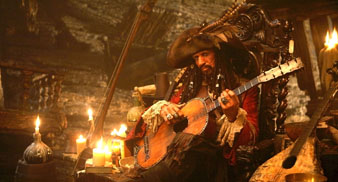 Uncut’s immensely fancy tenth anniversary issue arrives in the shops next Tuesday. And besides the magazine, it comes with a free CD of Bob Dylan’s favourite tunes, and a free book – a compendium of the finest rock facts, no less – called The Uncut Book Of Revelations.

Alongside the usual Uncut features, you’ll find an intimate chat with Keith Richards and Johnny Depp. “I was afraid to meet him for a long time,” says Depp, “Because there is always a fear that your heroes are going to be shitheads.”

“At first it was like, ‘Not another one of my fucking son’s friends’,” continues Richards, “Johnny started kind of like that and then he worked his way up with me.”

Elsewhere in the mag, Johnny Marr reveals that he “still hangs out with Morrissey from time to time and we talk about many things, but that subject [reforming The Smiths] never comes up. There’d be no good reason to discuss it now. All our lives have moved on. In positive and interesting ways, I’d like to think.”

Read the full interviews with Johnny Marr, Johnny Depp and Keith Richards, plus an A-Z of Bob Dylan, an exclusive with REM and an all-star audience with Paul Weller, in the new Uncut, on sale Tuesday July 3.