It's more 'epic' than previous offerings 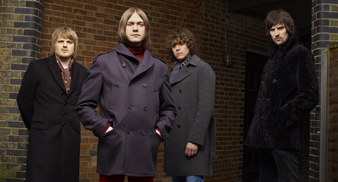 Kasabian will release their new album in October, a record label spokesperson for the band has said.

Although the album is still being finished and is currently untitled, the spokesperson said that plans to release it have now been put in place.

“They’re mixing it,” the Sony/BMG rep told Thisisleicestershire.co.uk, as well as revealing the October release plan. It is believed that the rockers have been working with producer Dan The Automator on the record, and have been recording in San Francisco and Los Angeles.

Guitarist Serge Pizzorno described the sound of the record by saying he thinks the band have bettered their last album, ‘West Ryder Pauper Lunatic Asylum’.

“Well, it’s epic,” he claimed. “It’s big songs that make you feel like anything’s possible. It’s a really positive record. I suppose it’s a combination of all three records but we’ve just taken it a bit further.”

He added: “I’m really excited about it, because after the last record, people really liked it and wanted to know what was next, and I’m happy to say that it’s got better. I’m excited about playing it live – there are tunes on there that are going to take people to a new place.”