Kasabian Give Update on New Album

Noel Gallagher to get sneak preview 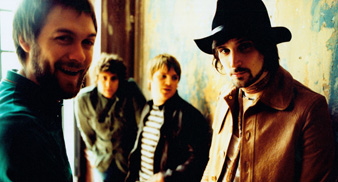 Kasabian have revealed that they have almost completed their third studio album, despite the obvious distractions.

“We go to the studio, potter around, eat sandwiches and it’s hard to get things finished. We’re about 80 per cent done now,” said bassist, Chris Edwards talking to The Sunday Mirror.

Details of the follow up to Empire have been scarce, but songwriter Sergio Pizzorno confirmed that last year’s very limited edition single ‘Fast Fuse’ will feature on the record.

“We’re sort of in the process,” added Pizzorno. “I don’t really know when it’s going to be released, but as soon as we think it’s ready it’ll be out. It’s psychedelic this one, it’s going to open your mind.”

The band has also revealed that they will test out the new record on their close friend, Noel Gallagher

He added, “We’re going to play it for Noel in a couple of weeks. He speaks his mind.”