Karen O: ‘I have been working on new Yeah Yeah Yeahs music’ 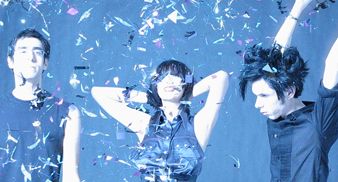 Karen O has revealed that she has been working on new material with her bandmates in the Yeah Yeah Yeahs.

The New York trio have been on an extended break after they completed their promotional duties for their third album ‘It’s Blitz’, but the singer has now revealed that they have been working on new music.

Speaking to The Sun, O also said that she was also planning to open her opera ‘Stop The Virgens’ in London after its successful run in New York.

She said: “It’s [Stop The Virgens] a psycho rock opera in New York which was amazing and we want to take it to London. And I’ve been tinkering around on some new Yeah Yeah Yeahs music with the boys.”

O also spoke about her cover of Led Zeppelin‘s ‘Immigrant Song’, which she recorded with Nine Inch Nails‘ Trent Reznor for his soundtrack for the forthcoming film The Girl With The Dragon Tattoo, revealing that she knew nothing about Led Zeppelin before recording the track. You can hear the track by scrolling down to the bottom of the page and clicking.

She said: “I plead total ignorance to Led Zeppelin. I am totally in the dark about them. That was the reason I could muster up whatever it took to actually cover that song. I didn’t have any reverence for the track as I didn’t really know it. When they asked I thought it was called ‘The Pilgrim Song'”.

O also described working on the track as “fun and liberating”, but recorded the cover while “feeling pretty angsty”.

She added: “When I went into the studio to record the song I was feeling pretty angsty. I poured all my torment into the track as Trent’s section was pretty rad. It’s ballsy with the primal scream in there which was really fun and liberating to do”.

Trent Reznor‘s The Girl With The Dragon Tattoo soundtrack, which he has composed with Atticus Ross, will be released later today, with a sampler, consisting of six tracks, available for free download now from Dragontattoo.sandbaghq.com.

The remake of The Girl With The Dragon Tattoo has been directed by David Fincher and stars Daniel Craig and Rooney Mara. It will be released in UK cinemas on December 26.