Their third album is out then, too 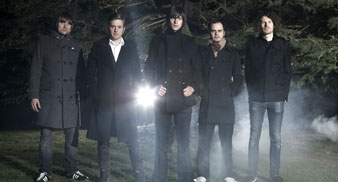 To provide a diversion from their current low-cal slanging match with Noel Gallagher, Kaiser Chiefs are heading off on tour in October.

The dates are pretty intimate by their standards, and kick off on October 8 with a show, suitably, in Leeds.

The band’s new single, “Never Miss A Beat” comes out a couple of days earlier on October 6. As Gallagher has helpfully pointed out to the press, it’s produced by Mark Ronson. It also features backing vocals from Lily Allen and New Young Pony Club. The Kaisers’ third album, Off With Their Heads, follows on October 13.

Here are those dates, anyway:

Tickets go on sale at 9am on August 21. The support acts are Late Of The Pier and a new Leeds band, The Hair.