Mark Ronson, Lily Allen and David Arnold all onboard 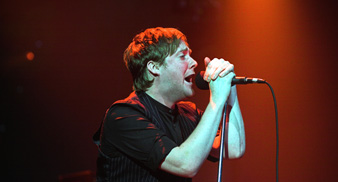 The 11-track follow-up to 2007’s ‘Yours Truly Angry Mob‘ has been co-produced by Mark Ronson and Eliot James as well as featuring a host of guest singers and muscians.

The track “Like It Too Much” features string arrangements from David Arnold.

The track “Like It Too Much” features string arrangements by famous James Bond film theme composer David Arnold.

UK rapper Sway also makes an appearance on the album, contributing to “Half The Truth.”

In a posting on the band’s MySpace page, Kaiser Chiefs say: “We’re planning a tour for later on in the year and looking forward to hearing the first single on the radio soon. Mark Ronson has been bigging up the album in interviews for a while now which is nice because it sounds better coming from someone not in the band but we think it’s our best album yet.”

Kaiser Chiefs’ Off With Their Heads full tracklisting is: