Julian Cope Gets Cut Off At Latitude

The Archdrude runs over his slot 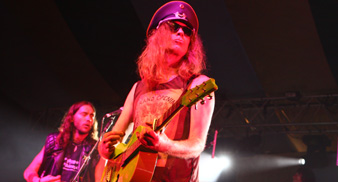 Julian Cope had the plug pulled on his set at Latitude festival today (July 18) after starting his set 30 minutes late.

The show was due to start at 19.25 (BST) but was delayed while the band sound checked, hidden behind a black cloth.

Cope, best known for his involvement with The Teadrdrop Explodes, began the set with new material but two songs in he introduced “Sleeping Gas”:

“Many years ago I was in a band from Liverpool,” said Cope to cheers from the crowd. “We were far from fashionable. We made a few social faux pas and paid the price heavily for it.”

Cope gave a spoken word performance of the intro for his song “Pristeen”, then said “Now we’re going to do this song justice and give it some vocals”, when the volume was cut.

Check out the Latitude Blog later this evening for more details of Julian Cope’s outrageous performance and stay tuned to uncut.co.uk for all of your Latitude news.