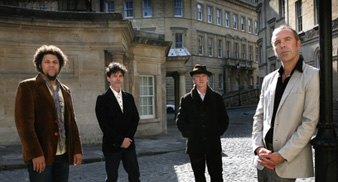 A recently reunited Crowded House have revealed details of their forthcoming new fourteen track studio album “Time On Earth” which is due out on July 2.

The group’s line-up in 2007 is made up of original founder members Neil Finn and Nick Seymour, as well as former member Mark Hart and newcomer Matt Sherrod, who replaces Paul Hester, who passed away in 2005.

“Time On Earth” is the first set of new songs since 1993’s “Together Alone” and the sleeve artwork is once again taken from a painting by Nick Seymour, as on all previous Crowded House LPs.

Former Smith and now member of Modest Mouse, Johnny Marr halps out on two of the new tracks.

The guitar legend appears on the first single to be taken from the album, “Don’t Stop Now” which is due for release on June 25.

Marr also shares writing credits with Neil Finn on the album track “Even A Child.”

Also appearing on “Time On Earth” – are the Dixie Chicks – who co-wrote “Silent House” with Finn. A version of the song already features on their Grammy award-winning album “Taking The Long Way.”

The new studio album’s tracklisting is as follows:

The band are set to play their first show since reforming at US music festival Coachella this coming Sunday (April 29).

They are also due to co-headline Hyde Park Calling in London on June 23 with Peter Gabriel as well as the Oustider Festival in Scotland on June 24.

Full tour dates are to be announced soon.

More information about their reunion is available Monday