John Coltrane: “No-one could keep up with him” 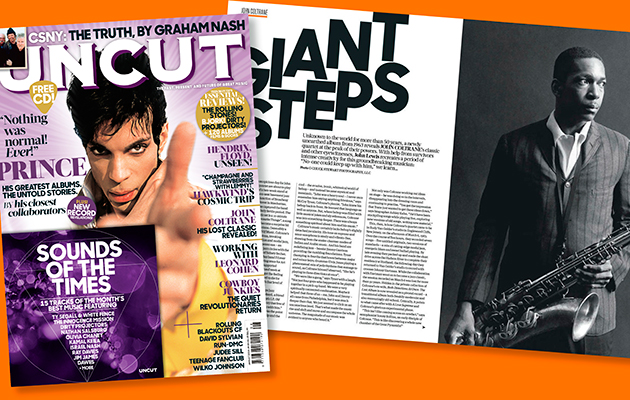 June 29 sees the release of John Coltrane’s Both Directions At Once: The Lost Album – the fruits of a 1963 session thought to have been destroyed until a stash of half-inch preview tapes were discovered by the family of Coltrane’s former wife Naima.

The album finds Coltrane breaking exciting new ground with his Classic Quartet, just two years before the release of his masterpiece A Love Supreme. In the latest issue of Uncut – on sale now – we piece together the story of this great lost album, with the help of musicians who were there are the time.

“This was intense stuff, man,” says Jazz Messengers trumpeter Freddie Hubbard, who played on the 1961 album Olé Coltrane. “He was moving into territory that few of us dared enter.”

Pianist McCoy Tyner, a key member of the Classic Quartet, recalls how the group were much more than just a pick-up band. “We were a very spiritually connected combination… We just seemed to click on a unconscious level. That’s what made the music rise and shift and move and encompass the whole universe. The magnitude of our music was evident to anyone who heard it.”

Nobody is exactly sure why Coltrane shelved the Both Directions At Once sessions, but Coltrane biographer Ashley Kahn ventures that it fell victim to the musician’s relentless onward quest: “Maybe he felt – after releasing Crescent and A Love Supreme – that he’d moved on too much for it to be relevant.” However, Kahn is keen to stress how well it stacks up against his greatest material. “What’s amazing is that this session is arranged like an LP. It works out to around 22 minutes a side. It’s balanced in the way the best Coltrane LPs were at the time – a bit of blues, a couple of standards, some far-out originals. These aren’t out-takes. And it’s a revelation.”

Read much more about John Coltrane and Both Directions At Once: The Lost Album in the latest issue of Uncut, out now.