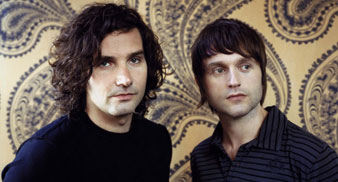 Although this is the first band they have fronted, the pair have previously worked with and produced albums for diverse artists including Strummer, Pulp (Genn was an early member), Elastica, Brian Eno, Grace Jones and Black Grape.

Genn also achieved notoriety by running onstage naked during a performance by Elastica at Glastonbury in 1995.

The hotly-tipped Hours, backed by a 4-piece band, played a 6 song set of anthemic but lyrically dark pop – reminiscent of Travis, Oasis and Coldplay – to a packed crowd at the Water Rats, London. They finished the set with forthcoming debut single, “Ali In The Jungle.”

Talking of their past musical lives, Genn says “ We have been in groups with the greatest British poets: Shaun Ryder, Jarvis Cocker and Joe Strummer. So, I always told myself, unless you’ve got something to say, don’t even step towards that mic.”

Endorsement for their collaboration has come from Damien Hirst – who designed their artwork – and Genn’s ex bandmate in Pulp, Jarvis Cocker.

“They understand what music is for – it’s for human beings to communicate with other human beings. It’s that simple, it’s that important,” says Jarvis. “Let them into your life. You won’t regret it.” The pair also figure on Jarvis’ forthcoming debut solo album, released on November 14.


“Ali In The Jungle” is released on November 6.
“Narcissus Road” the debut album will be released by A&M Records in January.