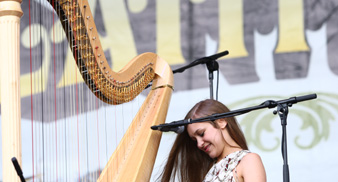 Taking the stage just after midday, the harpist performed a selection of tracks from her two albums, “The Milk-Eyed Mender” and “Ys”, along with a handful of new songs.

Opening track “Bridges And Balloons” got a rapturous reception from the large audience, who remained quiet and highly appreciative throughout.

After “Colleen” and “Sadie”, the former taken from her “Joanna Newsom And The Ys Street Band” EP, Newsom switched to the piano and performed three untitled new tracks, which were stylistically closer to her debut than the twisty epics of “Ys”.

Following the last new song, Newsom said: “You are such a lovely audience. I wasn’t gonna play many new ones ‘cause I thought it was a festival and it was gonna be really loud. So thank you for listening!”

Returning to the harp, Newsom played “Sawdust And Diamonds”, throughout which she repeatedly forgot her lyrics, much to the delight of the crowd, who cheered and clapped when she remembered them.

Eventually abandoning the song, she closed with a version of “Peach, Plum, Pear”.

Read our Uncut review of Joanna Newsom’s performance over at the Uncut Latitude blog.