Jimmy Webb on Bruce Springsteen: “There’s no snobbery in him”

One of the inspirations for Western Stars talks to Uncut 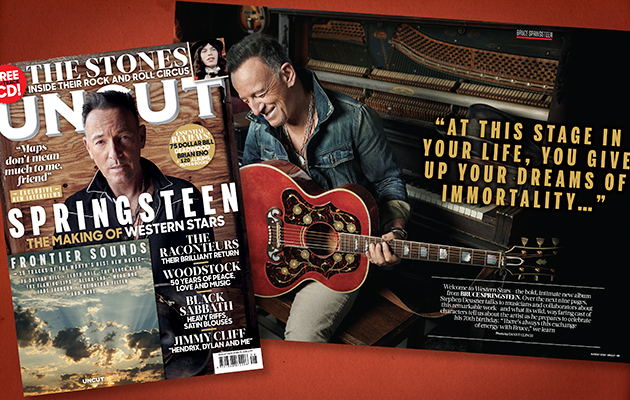 The new issue of Uncut – in shops now or available to buy online by clicking here – includes an extensive report on the making of Bruce Springsteen’s bold new album Western Stars.

Back in 2017, Springsteen revealed that the album was “influenced by the Southern California pop music of the ’70s… Glen Campbell, Jimmy Webb, Burt Bacharach, those kinds of records. I don’t know if people will hear those influences, but that was what I had in my mind. It gave me something to hook an album around;  it gave me some inspiration to write. And also, it’s a singer-songwriter record. It’s connected to my solo records writing-wise, more Tunnel Of Love and Devils And Dust, but it’s not like them at all. Just different characters living their lives.”

Those aren’t the usual suspects when it comes to listing Springsteen’s influences, and he’s rarely, if ever, mentioned them before in interviews. So it’s surprising that he sounds so natural in this setting, that he’s able to thoroughly absorb those West Coast vibes into his music as a new frame for some of his most narrative songwriting in years.

When Uncut spoke to Jimmy Webb, the legendary songwriter admits he didn’t expect to ever be cited by Springsteen: “I had heard these rumours and thought, ‘Is it possible that this is true? This guy needs us like a migraine!’ I think it’s a very bold and admirable step, and it certainly shows that he’s connected with the ground. He’s planted down here with all of us. It shows there’s no snobbery in him.”

Webb is particularly with impressed Western Stars’ lead single “Hello Sunshine”, a lovely, gentle ode to those happy moments that never seem to last as long as you’d like. “You know I always liked my walking shoes/ But you can get a little too fond of the blues,” sings Springsteen, over a chugging-train snare pattern and a fluttering finger-picked guitar. “You fall in love with lonely/ You end up that way.”

It’s among the most revealing lyrics of Springsteen’s long career, a few lines that might unlock every song he’s ever written, and at least one way he has captured something integral to the Southern California pop music he’s emulating. “I was amazed at how he locked on to the sensual pleasure that can be derived from loneliness,” says Webb. “From what Warren Zevon used to call ‘splendid isolation’. And yet, at the same time, he’s recognising there’s a danger there. There’s a dark side. That lonely road has its appeal, but at the same time he’s cautioning you: don’t get too far out there as you might not be able to get back. That’s so intense and personal. The largesse of the artist in revealing that to the listener is amazing.”

You can read much about Bruce Springsteen and Western Stars in the new issue of Uncut, out now.