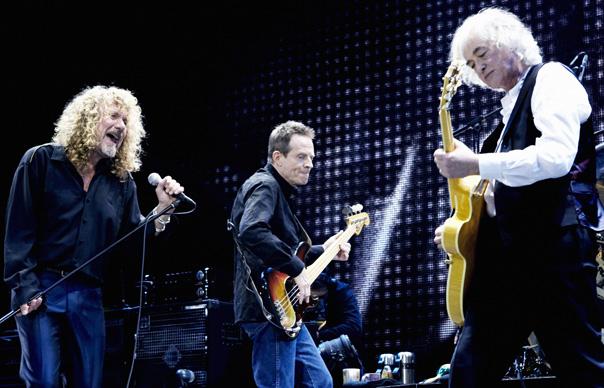 Jimmy Page says it took two years before he and the rest of Led Zeppelin sat down to watch the footage of their 2007 reunion show, and another three years before it was ready for release.

Speaking to NME at the London premiere of Celebration Day, Page said: “It was important that if we were going to do [a reunion] at all, that we went out there and did it properly. We put a lot of time and effort into it so that it would be what you’re going to see now, which is just one show – that’s all we did, no warm-up gigs, no follow-up. It wasn’t designed to be a film at all. That’s why it’s taken a little while to come out, because we didn’t even look at it for two years after we’d done it, so we could be a bit more objective about it.”

The guitarist also revealed that there were sound problems onstage at the O2 Arena, but that the band were well-rehearsed enough to overcome them. “The first two numbers we couldn’t hear the monitors onstage, so that’s how well attuned we were for it… it just grew all the way through,” he said.

Also on the red carpet were Led Zeppelin singer Robert Plant, who revealed that “For Your Life” was his favourite song of the show, because “we’d never played it together before,” and Kasabian’s Serge Pizzorno, who described Led Zeppelin as “Just an incredible rock’n’roll band.”

The three members of Led Zeppelin evaded questions about when the next reunion might happen. Last week, Robert Plant called a journalist in New York a “schmuck” for asking the same.

Celebration Day, a concert film of the band’s 2007 appearance at London’s 02 Arena, will screen in cinemas from October 17. It will then get a general DVD release on November 19. A deluxe edition will also include footage of the Shepperton rehearsals, as well as BBC news footage.