Kramer speaks to Uncut on the eve of the album's reissue 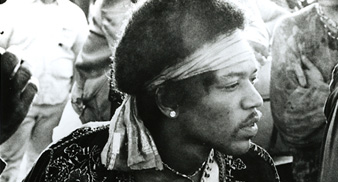 Jimi Hendrix producer Eddie Kramer has spoken to UNCUT about the making of the classic third Jimi Hendrix Experience album, Electric Ladyland – now being reissued with an additional “making of” DVD.

Though remembered by some as the product of hostile sessions, Kramer recalled that the process of making Electric Ladyland – during which original Hendrix producer/manager Chas Chandler quit – was the inevitable consequence of strong personalities butting heads, and ultimately necessary for Hendrix to fulfil his artistic vision.

“Chas and Jimi didn’t really get on in terms of how many people Jimi wanted in the control room.,” says Kramer today of the 1967-8 recordings. “Chas felt that he, Jimi, was playing for the audience as opposed to for the production, but I don’t think that was strictly speaking true. I think Jimi loved all that attention, and Chas thought it was a distraction– then they split.”

Chandler, former bassist with the Animals, had masterminded Hendrix’s rise, bringing the guitarist to the UK and assembling the original Experience round him. A producer with a wealth of pop experience, Chandler found that he couldn’t accommodate Hendrix’s increasingly ambitious ideas. With Chandler gone, Hendrix and Kramer were able to indulge the guitarist’s schemes.

“After he left, the gate was open and Jimi could experiment,” says Kramer. “The whole album was an experimental thing. Whether it turned out to be a blues jam like ‘Voodoo Chile’, which was magnificent, or an experimental thing like ‘1983…’ it didn’t really matter, because it all fitted together.

“This is the key element here: Hendrix had a very distinct, clear-headed vision for what he wanted. ‘Voodoo Chile’, which on the surface would seem to be a casual sort of jam – in fact it was incredibly, meticulously planned, and the right situation had to present itself in order for that jam to occur.

“He would go to the Scene club, find musicians who were capable of keeping up with him and march them a couple of blocks up to the studio…then we would just roll tape, and we would get it in two takes. It’s live, off the floor, no overdubs – a perfect rendition of what he had in his head.”

For Kramer, this kind of vision was a crucial part of Hendrix’s artistry. Though it’s occasionally been criticised as overlong, the producer finds that rather, Electric Ladyland was a signpost to where Hendrix was headed next: the live funk of the Band Of Gypsies project, and then later, the re-tooled new version of the Experience.

“If it has ever been suggested that Jimi Hendrix was not prepared, this refutes that in the sense that Jimi had a real solid grasp of what he wanted to do,” says Kramer. “The artwork, the process, the fine details of it, it’s an example of how Jimi’s mind worked. There are very few artists like that.”