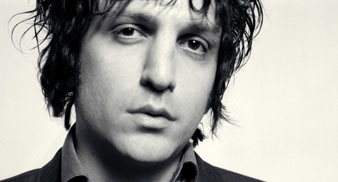 Having previously only sold an official live bootleg recorded in Liverpool and sold at his own shows in May 2004 (Messed Up Tonight), this is the first time Malin has put out a proper live album.

Out on December 15 via One Little Indian, the UK edition will also feature five unreleased studio tracks from the Glitter in The Gutter album sessions.

Speaking about Mercury Retrograde, the punk-poet has said: “Leaving the house and going out to see live shows is a ritual for me – a physical experience that I can’t get at home just listening to a studio album. For my first ever-live album, I wanted to record the songs differently by going back to the original essence of how they were written, on an acoustic guitar. Over the past couple years I’ve been touring with a full band, but for this album, I wanted to go back to the way it was in the beginning and just do a stripped down acoustic set.”

Malin will play a short UK tour at the end of the year to support the release, choosing small venues so as to recreate the setting the album was created in.

The Mercury Retrograde track listing is: