Jeff Tweedy Comes Out In Support Of Barack Obama

Wilco frontman to play benefit for US presidential hopeful 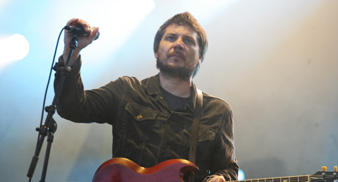 Wilco frontman Jeff Tweedy is headline a benefit gig in honour of Barack Obama, the Democrat candidate running for office.

The concert ‘Change Rocks’ takes place this Friday (December 7) in Tweedy’s hometown of Chicago as part of Obama’s electoral campaign.

Don’t get too excited about the rest of the bill at the Riviera Theatre though: it features Third Eye Blind frontman Stephan Jenkins, Jill Sobule and the Cool Kids.