Jason Bonham – More Nervous Than The Rest Of Led Zep

His bandmates from Foreigner have been keeping tabs on him 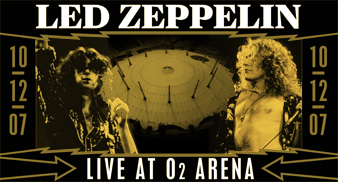 Jason Bonham‘s regular bandmates from Foreigner have been keeping an eye on him prior to tonight’s one-off Led Zeppelin concert at the O2 Arena (December 10).

Foreigner, who Bonham drums with, are currently on a European tour, and have just explained to uncut.co.uk how the rescheduled date from November 26 to today has really complicated their show times.

The band have just flown in from performing a show in Berlin, and have to fly straight back out to Zurich tonight, but as singer Kelly Hansen explained: “This show was about doing it for Ahmet, it’s a pleasure to be here, it’s just a shame that we were on such a short amount of time.

Guitarist Mick Jones added: “When you have such a small amount of time on stage, it’s hard, you have to find it within you to give it your all. I’m so pleased we got to play Ahmet’s favourite Foreigner song.”

Having just been speaking to Jason Bonham backstage, it would appear that nerves are wracking him, though of course he’s looking forward to doing his utmost for Ahmet, the band and his dad.

Jason has previously taken on the role of drumming briefly with Led Zeppelin, once at Atlantic Records 40th birthday party in 1988 and the second time at his own wedding party back in 1990.

We have been reporting live from the tribute to Ahmet Ertegun concert, headlined by Led Zeppelin throughout the evening. Coming up, all the bands, gossip, and fans reactions.

You can also see Uncut’s sister title nme.com for even more live coverage from the concert.