This year's Meltdown curator gets it on with Melvyn Bragg 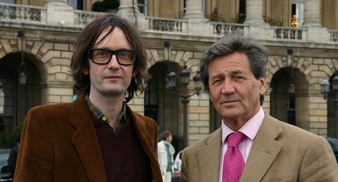 Jarvis Cocker is to be the subject of a South Bank Show special, to be broadcast in June.

Jarvis, now a cultural icon and the newly appointed curator of this year’s Meltdown festival at the Royal Festival Hall, met up with South Bank Show presenter Melvyn Bragg in Paris to talk about songwriting, politics and living in France.

After forming Pulp in the late 70s, it took Jarvis over a decade to find success through music, with massive hits including the early 90s era-shaping hits “Common People” and “Sorted For Es And Wizz.”

Jarvis says his ambition was ‘to write songs that included the bits which other pop songs had edited out.’

Four years ago, Jarvis moved to Paris, but has recently re-emerged with his first solo album, “Jarvis” which was nominated for a Brit Award for Best Solo Male.

Another highlight of the prgramme is a rare interview given by Scott Walker, who praises Jarvis’ songwriting abilities.

The show also sees Jarvis take Bragg on a tour of Paris, before returning to Castle Market in his hometown of Sheffield. Jarvis comments that his first job there as a teenager on an crab stall was “probably the only proper job I’ve had in my life.”

South bank shows are available as both podcast and vodcast from itv.com here