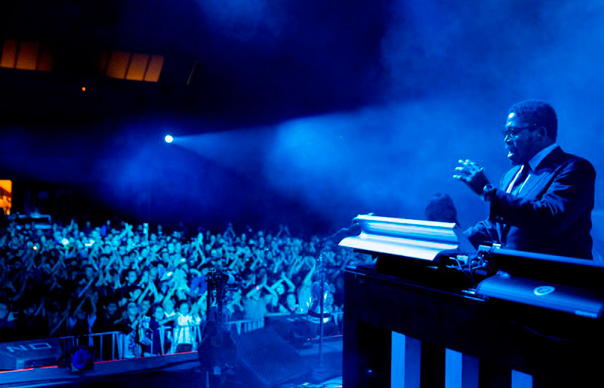 News of Isaiah ‘Ikey’ Owens’ passing was announced on Jack White‘s official website, via a statement which read: “It is with great sadness that we tell the world of the passing of the incredible musician Isaiah ‘Ikey’ Owens. He will be missed and loved forever by his family, friends, bandmates and fans.”

It continued: “Ikey Owens was an astounding keyboard player in Jack White’s backing band. He also played with Mars Volta, Free Moral Agents, and many other projects. Out of respect for Ikey, the remaining shows of the Jack White Tour in Mexico have been cancelled. We will all miss you Ikey. You were and are an incredible artist.”

Isaiah Randolph “Ikey” Owens began his career playing in bands in his native Long Beach, California, including his own, Free Moral Agents. He played with the Mars Volta from 2001 to 2009, and began playing with White in 2012. He played on White’s Blunderbuss and Lazaretto albums, as well as on the accompanying tours.

Owens many other credits included live or session work for TV On The Radio’s Dave Sitek, Shuggie Otis, Mastodon and Crystal Antlers.

The Los Angeles Times reports that Owens had recently moved to Nashville, citing a June 2014 interview published in the Orange County Register, where the musician said that trips from Long Beach to Nashville, to work with White, had been hugely rewarding.

“(I learned) new ways to approach everything,” Owens explained. “Just similarities of country Americana with reggae and funk and hip-hop. A lot of the principles and a lot of the methodologies are all kind of easy to do in Long Beach. It all kind of translates.”

“Now that I’m getting older, it’s really hard to try and professionally make records in Long Beach,” Owens told the Orange County Register. “I don’t want to live in L.A.; I’m not really interested in New York. Nashville has been really good to me and kind of developing my career more in the studio.”

Owens was found dead in his hotel room in Puebla, Mexico on Tuesday, October 14. Authorities say the cause of death is currently unknown, according to the Spanish-language Periodico Digital.