Jack White: “I knew this record would be divisive” 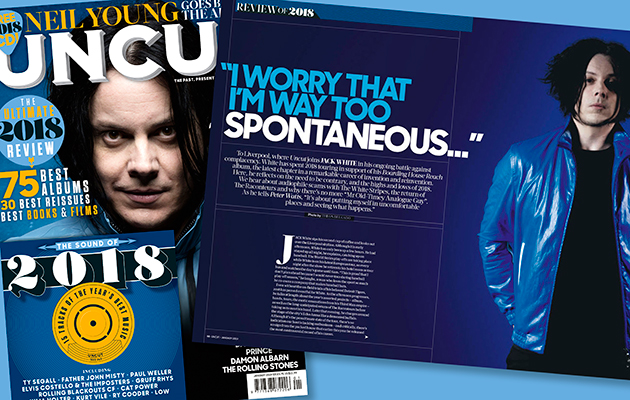 The new issue of Uncut – in shops now or available to buy online by clicking here – features our comprehensive look-back at the music (and films and books) that defined 2018.

The issue is headed up by Uncut’s Artist Of The Year Jack White, who takes stock of what, for him, has been a hectic and wildly successful – but also somewhat controversial – year.

March’s Boarding House Reach, White’s third solo album, gained him an American No 1, but it also left a few people scratching their heads. Even friends were conflicted. “They would come by when I was mixing,” White recalls. “They’d say ‘Holy shit, that’s amazing!’ Then five minutes later, ‘Oh my God… are you really putting that on the record?’”

“I knew this record would be divisive,” he continues. “There would be songs that people didn’t like. There were three spoken word songs. It was a way of making things harder for myself, putting hand grenades in front of myself… People think I’m some kind of control freak. But I’ve never stood and told a song what to do – you are going to be this kind of song, and then put stuff in, force it to emulate some kind of song from the past. People want to put you in the box, it’s easier for them, and so I became Mr Old-Timey Analogue Guy. Then you do something different, as I always have, and they are thrown.”

White’s drummer, Carla Azar, gives an indication of his recording style. “He loves throwing people together and making a situation,” she says. “He’ll never stop an idea before he’s heard it through. He can always press delete at the end – that’s where he has the control.” White works fast – sometimes completing a take before Azar has settled on the part she wants to play. So she’s learnt to make deliberate mistakes, forcing him to go back and do another take. “I trick him into playing what I really want to play,” she grins. “I’ve never told him that – put it in, he’ll love it.”

Although White seems to have extraordinary self-belief, he admits he has moments of self-doubt. When he’s recording new songs, he says, he likes to pretend he’s doing a cover. “I’m more comfortable covering other people’s music so I pretend my song has been written by somebody else a long time ago,” he says. “I started that in The White Stripes and have carried it in all my projects. I used to write my own songs and think they were OK,  but then cover somebody else’s and find the  chord changes amazing and felt so alive, more comfortable. So I began to pretend I was covering my own songs and it frees me up.”

In his constant battle against complacency, White loves to set himself challenges. This year, he has been playing with three guitars designed by musicians, including one by St Vincent intended for women. “It’s about putting myself in uncomfortable places and seeing what happens,” he says. “People think that as you gain more freedom, things become easier – somebody will tune your guitar, they’ll find you nicer mics – but that doesn’t make it easier. If you are a painter, you can’t have somebody else mix your paints, you can’t delegate the heavy work to somebody else. You need to find ways to make things harder. Paint on a jagged rock. Paint on dirt.

“I’m not a pop star, so I don’t have to come up with hits to stay alive,” he continues. “I’m very glad I don’t have that sort of pressure, because that wouldn’t be interesting. I get to serve the song rather than any image. That’s something people might not know about me, but it’s always about the song. Whatever it takes to keep the song alive. It’s not about, ‘This is who I am, or this is who people think I am, or this is what people expect so I’m going to give them what they expect or be contrary.’ That’s a lot of work that doesn’t interest me. With me that would turn into comedy.”

You can read much more from Jack White, his band and fellow Third Man insiders in the new issue of Uncut, out now.