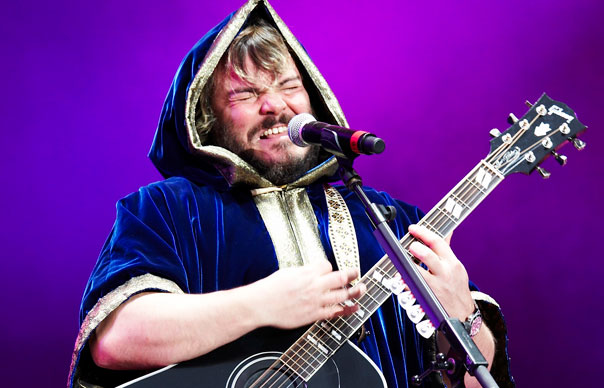 The comedy singer says he wrote the song ‘Rock is Dead’ on Tenacious D’s new album ‘Rize of the Fenix’ because of the lack of massive rock bands that “drive kids insane”. He tells Rolling Stone: “When you think about rock at its origin, and you think of The Beatles and millions of kids screaming as loud as they can and running as fast as they can towards The Beatles, there’s no one who is that kind of lightning rod, who commands that kind of power and has that kind of creative magma.”

He adds: “I contend that the last band to really have that kind of power, I’m gonna say, was Nirvana. Who since Nirvana has been as big as Nirvana, in that way?”

However, Black is a fan of Jack White – “Whatever he does is worth checking out – and his archnemesis, The Black Keys, are also tremendous,” he says. He also namechecked the Foo Fighters: “The Foo Fighters. I loves me some Foos. But [rock music] does get thin after that.”

Tenacious D are currently streaming their new album ‘Rize Of The Fenix’ online in full, scroll down to the bottom of the page and click to listen to the record. Dave Grohl, who has drummed on both of the band’s previous records, has once again contributed to the album.

Tenacious D will play five UK shows this June in support of the album’s release. They will play three shows at London’s O2 Academy Brixton on June 5, 6 and 7, Manchester’s O2 Apollo on June 10 and Glasgow SECC on June 12.