Is This The Real Robert Johnson?

A third photograph of the blues legend allegedly found 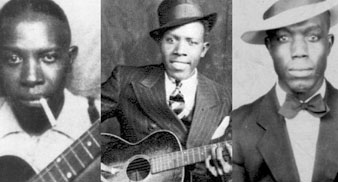 Uncut has found an ebay seller that purports to have found a third photograph of famous Delta bluesman Robert Leroy Johnson.

The listing by SDPhan in San Diego, California claims to have found the photograph whilst “at the swap meet digging through a photo album of old south delta type photos.”

Johnson’s history is infamously obscure, hardly anything certain is known about him apart from the fact that he recorded 29 songs and that he died young.

In his introduction to Alan Greenberg’s film script ‘Love In Vain: A Vision Of Robert Johnson,’ Martin Scorsese says, “The thing about Robert Johnson was that he only existed on his records. He was pure legend.”

There are only two known verified photographs of the musician, but this third one does bear some resemblance.

The seller has set the starting bid on the photograph at $795,000.00 but if it turns out to be genuine – it’s surely priceless.

We’ve looked closely at the existing pictures (one of which is pictured above on the left) and this new one (above, right) – without his fingers in view it becomes more tricky – but his right ear is very similar.

Also the first and alleged third picture both have the higher right eyebrow, dimple on chin and similar nose…

What do you think? Is this Robert Johnson?

Click here to go to the listing and see what you think- is this Robert Johnson? Bidding ends in less than 24 hours