Somewhere Back In Time flies into Mumbai, piloted by singer Bruce Dickinson! 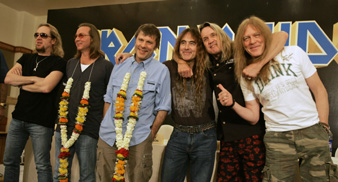 Iron Maiden are the first rockers to fly their own aeroplane — complete with all their crew and equipment — on a 19 world city tour, with trained commercial pilot, and the band’s singer Bruce Dickinson as pilot.

The plane, christened ‘Ed Force One’ by fans, after Iron Maiden’s mascot Eddie is a specially customised Boeing 757 which will transport the band and crew 50,000 miles in the next few months.

Band manager Rod Smallwood loves the speed of the single aeroplane, despite the complications of how to fit everything together. He says “It is pretty complex to do this. You’ve got 12 tons of equipment, you’ve got 60-70 crew and you’ve got the band and their families. But with this plane, we can move quickly. On one leg of the tour we’re doing four major stadium shows in four different countries in one week. You just couldn’t do that the normal way.”

Maiden’s ‘Somewhere Back In Time‘ world tour harks back to the band’s Powerslave days. Dickinson describes the mammoth stage set up saying “We’re bringing a Monster of a show with us – pyramids, cyborgs, special effects and a setlist to blow every Maiden fan’s mind.

The tour arrives in the UK, when Iron Maiden play their first ever stadium show at Twickenham Statium on July 5.

Find out how you can fly with Bruce and co. on Ed Force One to selected European tour dates at www.ironmaiden.com