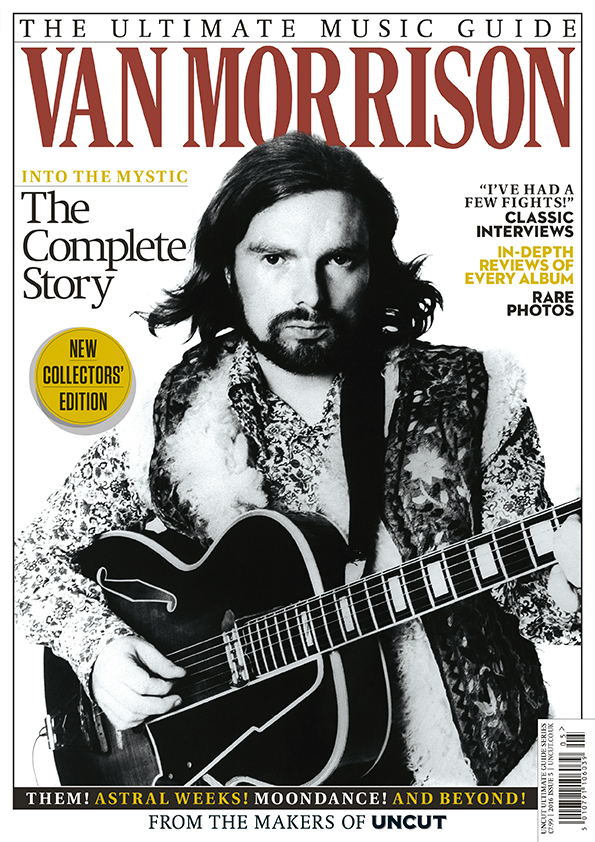 The legend of Van Morrison is one of the richest and most complicated in musical history, but most often it boils down to a certain familiar portrait. According to one observer, he “sometimes throws his advisers into a frenzy of hair-tearing despair: moody, unpredictable, perverse, often downright wilful — but always creative.”

These words bear the weight of long experience. They were, however, written in 1966, for the sleevenotes of “Them Again”, only the second album that Morrison was involved with. The youthful singer hadn’t even stepped out of the garage band ranks, hadn’t endured the harrowing business tussles that would mark the start of his solo career. Already, though, an indelible image was in place: the furious, inscrutable auteur, raging at industry machinations that conspired to sully the purity of his art.

It would have been impossible to compile our Ultimate Music Guide on Van Morrison – out in the UK on Thursday, though you can buy it from our online shop right now, along with the latest volume of our History Of Rock project – without reflecting this part of his story. Substantial chunks of his later albums, after all, revolve around such complaints, and virtually every one of his rare interviews end up tackling the subject. “I don’t really suit the music business,” he tells Uncut’s Jon Wilde in a revelatory 2005 piece. “Or, indeed, any business. I’m incompatible with the way things are done… It’s not easy doing what I do. It’s not easy being able to fight the fight with these people.”

To most fans, however, Morrison appears to have fought the music business with uncommon skill, tenacity and, ultimately, success. In this latest Uncut Ultimate Music Guide, serendipitously timed to coincide with a radically expanded reissue of his classic “It’s Too Late To Stop Now” live set, new reviews of his back catalogue track the progress of a rogue spirit, chasing his muse across musical genres and spiritual codes, always privileging the spontaneous and unfettered. Compromises are, to put it mildly, thin on the ground. Epiphanies are commonplace: from the canonical high of Astral Weeks, through fervid sessions in Woodstock and California, on to the mystical quests of the ’80s and beyond, into less feted but equally rewarding territory.

In a 1983 NME piece reprinted in the edition, Gavin Martin recalls meeting Morrison in the company of Kevin Rowland. “Unaware of my own occupation,” Martin writes,”[Morrison] dismissed the music press, resenting all the dumb egotistical hacks, and said he only gave interviews if he held the copyright. In America, he continued, they’d brought out books with old interviews in them and what he said then no longer applied to what he was doing. Plus, they were making mileage out of his name, his past, and it was a game he’d stopped playing a long time ago.”

One can only speculate, fearfully, about what the man himself would make of all our passionate analysis, our revisiting his past showdowns with the writers of NME, Melody Maker and Uncut. Nevertheless, what emerges is a consistent portrait of a man apart, unstinting of vision, blessed with a voice like no other. Listen in: it’s just you and him and nature, in the garden, wet with rain…